I have a few different meals/recipes I want to share today! Nothing too crazy, mostly simple.

The first two are these egg and spinach dishes. Both breakfasts contain the same basic ingredients, just cooked in different ways. Over the weekend, I purchased a 10 ounce package of fresh spinach, and I’ve been in a mad dash to use it all up because I really don’t want it to go bad and go to waste. Not a big problem for me, though, because I really do like the taste of spinach. So, that’s what’s up with the load of spinach for both breakfasts! 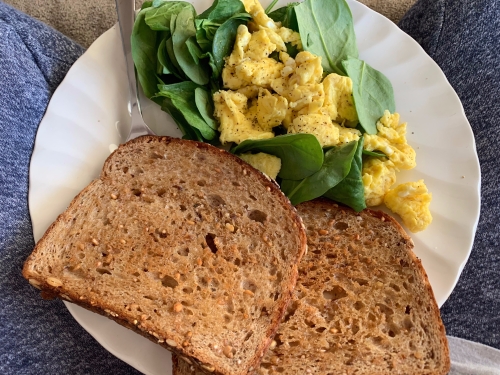 Tuesday’s breakfast was scrambled eggs with salt and pepper over fresh, uncooked spinach; the hot eggs wilted the leaves slightly. I don’t know why I never thought to include uncooked spinach for breakfast. I ALWAYS sauté spinach if I’m going to be using it in a breakfast dish, but I follow someone on Instagram who posted a picture of her breakfast plate full of fresh spinach with eggs for breakfast. I’m glad I tried it!

Today’s breakfast was a fried egg sprinkled with salt, pepper, and herbs de provence layered over fresh spinach and a slice of toast, served with red grapes on the side. It really only took a few minutes to make this, and I felt completely satisfied afterward. The most time-consuming part of cooking this was waiting for the bread to toast (because I don’t have a toaster at the moment).

(Side note: Does anyone like their fried eggs runny or do you like them completely cooked all the way through like I do? I just cannot do the runny egg.)

(Another side note: The bread I used for both breakfasts is Dave’s Killer Bread 21 Whole Grains and Seeds. It was on sale last time I went grocery shopping, and oh my word…I wish this bread wasn’t so expensive on the regular because IT IS SO GOOD. I have never liked any store-bought bread the way I like this brand.)

Next up on the menu is this crazy soup. That’s what I like to call it because it has SUCH a kick to it. John has been sick for a few days, so I made this soup because it is jam-packed with all kinds of ingredients that support the immune system, and who doesn’t want soup when they’re sick? I’ve been eating it too, attempting to ward off anything trying to come my way.

I added the oil to a pan and sauteed the onion, ginger, turmeric, garlic, salt and pepper, and cayenne for a few minutes before adding the chicken broth, chicken, and carrots. Bring to a boil, then turn down the heat and let it simmer in the pot for at least 30-60 minutes. Add the spinach to the pot about five minutes before serving.

I based this recipe off of one I found online. I tweaked it slightly by adding the freshly grated turmeric. This soup is spicy, just to warn you, and I really didn’t measure out my ingredients; I just followed my gut as far as how much turmeric, garlic, ginger, and cayenne to add. Honestly, you could add as much or as little as you want of each ingredient based on your taste preferences.

The most time-consuming part of this was dealing with the fresh ginger, turmeric and garlic. There was a lot of peeling, slicing, and dicing involved. (Also the turmeric will stain anything and everything a nice, bright yellow, so be careful!)

The last thing I want to share is this deliciously refreshing tea. I’m from the South where it’s a sin to drink any type of iced tea besides sweet, but I just cannot get on board. Not because I don’t like sweet tea (because it’s delicious, and I really do love it), but it’s just really not good for you with all that sugar. If you can get used to it, unsweetened iced tea is actually reeeeally good. I actually prefer it unsweetened; you get more of the real flavor out of the tea!

(I didn’t let him actually touch the pitcher, don’t worry!)

(It’s really so simple; it feels silly even writing out the ingredient list!)

Just brew the bags of tea in about 24 ounce of water, making a very concentrated tea. After it cools some, add the concentrated tea to a pitcher, adding more water to cut down on the tea’s strength. Slice up the cucumber and add it straight to pitcher along with a few handfuls of ice. The tea really does soak up the cucumber flavor, and mixed with the peppermint, it’s perfect! I decided to add the cucumber because I had about half of one in the fridge that needed to be used. I’m so glad I thought of it because the flavors worked so well together!

Hope you enjoy these random recipes. Thanks for reading!

There was an error retrieving images from Instagram. An attempt will be remade in a few minutes.